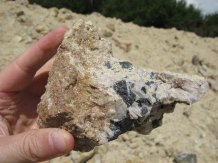 Geologists have developed a machine learning technique that highlights the potential for further deposits of the critical metal tungsten in SW England.

Tungsten is an essential component of high-performance steels but global production is strongly influenced by China and western countries are keen to develop alternative sources.

The work, published in the leading journal Geoscience Frontiers, has been led by Dr Chris Yeomans, from the Camborne School of Mines, and involved geoscientists from the University of Nottingham, Geological Survey of Finland (GTK) and the British Geological Survey.

The research applies machine learning to multiple existing datasets to examine the geological factors that have resulted in known tungsten deposits in SW England.

These findings are then applied across the wider region to predict areas where tungsten mineralisation is more likely and might have previously been overlooked.  The same methodology could be applied to help in the exploration for other metals around the world.

Dr Yeomans, a Postdoctoral Research Fellow at the Camborne School of Mines, based at the University of Exeter’s Penryn Campus in Cornwall said: “We’re really pleased with the methodology developed and the results of this study.

“SW England is already the focus of UK mineral exploration for tungsten but we wanted to demonstrate that new machine learning approaches may provide additional insights and highlight areas that might otherwise be overlooked.”

SW England hosts the fourth biggest tungsten deposit in the world (Hemerdon, near Plympton), that resulted in the UK being the sixth biggest global tungsten producer in 2017; the mine is currently being re-developed by Tungsten West Limited.

The Redmoor tin-tungsten project, being developed by Cornwall Resources Limited, has also been identified as being a potentially globally significant mineral deposit.

The new study suggests that there may be a wider potential for tungsten deposits and has attracted praise from those currently involved in the development of tungsten resources in SW England.

James McFarlane, from Tungsten West, said: “Tungsten has only been of economic interest in the last 100 years or so, during which exploration efforts for this critical metal have generally been short-lived.

“As such is very encouraging to see work that aims to holistically combine the available data to develop a tungsten prospectivity model in an area that has world-class potential”.

Brett Grist, from Cornwall Resources added: “Our own work has shown that applying modern techniques can reveal world-class deposits in this historic and globally-significant mining district.

“Dr Yeomans’ assertion, that the likelihood of new discoveries of tungsten mineralisation may be enhanced by a high-resolution gravity survey, is something in which we see great potential.

“Indeed, such a programme could stimulate the new discovery of economically significant deposits of a suite of critical metals, here in the southwest of the UK, for years to come.”