Antarctica is one the fastest changing regions of the world in terms of global warming, with significant ice sheet loss on the West Antarctic Peninsula in recent decades and changing ocean circulation. We are studying marine sediment cores from offshore Antarctica, the Falkland Plateau and South Georgia, analysing chemical proxies for changes to ocean temperature and biota. 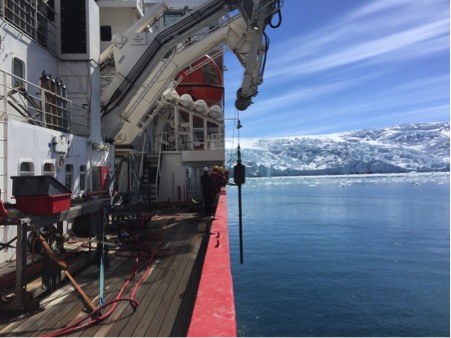 Dr Sev Kender travelled to the Antarctic Peninsula in December 2018 on the British Antarctic Survey research ship RRS James Clark Ross, where he collected sediment cores from underneath recently melted ice shelves. His project was funded by a grant from the Collaborative Antarctic Science Scheme. The main aims are to ascertain the primary cause of warming, and the response of ocean biota including diatoms and foraminifera. Recent research carried out by our group has indicated that upwelling of warm Upper Circumpolar Deep Water has increased in recent decades, similar to the early Holocene, which may account for this melting. You can read about some of this research in an article for The Conversation.

Our team is also involved in a large European Research Council Synergy grant that is employing novel techniques to understand the changes in ocean biota throughout the Holocene. The ‘Seachange’ project, worth 11.75 million euros, brings together scientists from four institutions across Europe including the University of Exeter. Part of the project Dr Sev Kender and Prof James Scourse are involved with combines ancient environmental DNA trapped within the ocean sediment, and conventional microfossil palaeontology, to gain a better understanding of the changes to Antarctic marine life through time.